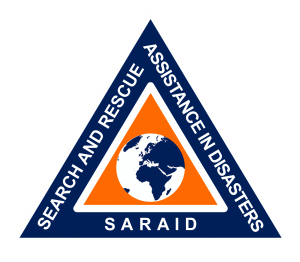 On Monday 19th September 2022 at 11.30pm the United Nations Global Disaster Alert and Coordination System (GDACS) sent out an alert of a magnitude 7.8 earthquake that had struck the “Republic of Angloland”, and within minutes this message was picked up by the volunteer members across the UK of Search and Rescue Assistance in Disasters (SARAID) International Response Team. SARAID is a UK based Charitable Incorporated Organisation (CIO) & Non- Governmental Organisation (NGO) and all its members are 100% unpaid volunteers.

Now luckily this wasn’t a real disaster alert but the start of SARAID’s United Nations International Search and Rescue Advisory Group (UN INSARAG) Light Urban Search and Rescue Team INSARAG External Classification (IEC) Exercise. The exercise was the culmination of 8 years of preparation and planning by the teams’ members & management, which had been delayed due to the COVID 19 pandemic and lock down. INSARAG is a global network of more than 90 countries and organisations under the United Nations umbrella. INSARAG deals with urban search and rescue (USAR) related issues, aiming to establish minimum international standards for USAR teams and methodology for international coordination in earthquake response. The IEC exercise is a peer-based review to test a team’s operational capabilities to ensure that only that they meet the INSARAG minimum standards and that only qualified and appropriate international USAR resources are deployed to an emergency.

Whilst this was the start of the 36hr exercise for the team, in the days preceding a group of 7 international classifiers had flown into the UK from Australia, France, Germany, Spain and the Czech Republic for meetings with the organisations management and exercise directing staff to begin the final process of assessing SARAID against an IEC checklist of 157 areas which covered management, logistics, search, rescue and medical elements as well as the team internal processes such as alert, activation and mobilisation process, training program and records, standard operating procedures, policy documents, team equipment cache, risk assessments, recruitment and selection process and administrative systems and much more. The team of classifiers also visited SARAID’s USAR equipment store at Yate Fire Station to carry out a thorough assessment of the team’s operational equipment cache including medical stock and meeting with the teams Equipment Store Manager, Logistics Manager and Medical Manager to exam and evaluate all policies and procedures. This was on the day of Queen Elizabeth II funeral,

and everyone took time out to watch the funeral on TV as well as joining members of Avon Fire & Rescue to pay their respects with a 2-minute silence outside the front of the fire station. 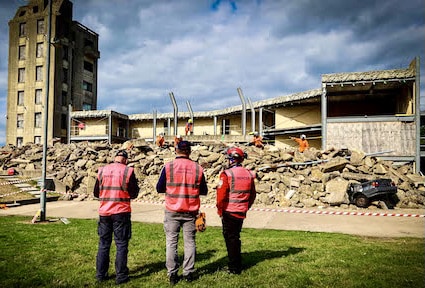 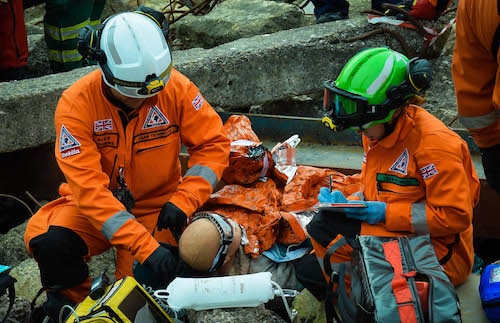 During the early hours of Tuesday 20th September, the teams Alert and Activation protocols were followed and by 07.00hrs the selected team of 23 personnel had all arrived at Yate Fire Station and were on Stand-By to deploy. The team of Classifiers observed the Mobilisation phase of pre- deployment medical checks, information gathering on the affected country, safety and security briefings and the constant updating of the Virtual On Site Operations and Coordination Centre (VOSOCC or VO) which is the first online coordination hub and main information gathering site for all international USAR teams and is a website managed by the UN Office for the Coordination of Humanitarian Affairs (OCHA). By 11.00am all the team’s equipment and team members were loaded onto vehicles to begin the simulated “flight” from the UK to the Republic of Angloland. The team arrived at Gloucester Staverton Airport to undergo passport checks, issue of visa’s, immigration and customs procedures carried out in the arrivals lounge of the airport. The team’s equipment manifest and dangerous goods declaration was thoroughly inspected by customs officers to ensure required items had been packed and labelled according to IATA’s Dangerous Goods Regulations. At the airport SARAID’s Coordination Support Team members assisted members of @fire International Disaster Response Germany (@fire Internationaler Katastrophenschultz Deutschland) a German non-profit, non-governmental organisation who had gone through the same IEC process a few months before and became the first INSARAG classified Light USAR Team in the world, to set up and run a Reception and Departure Centre (RDC) which provides other incoming teams with a focal and information point in country and supports the airport management, this is a requirement within the INSARAG Guidelines. Following an up-to-date situation briefing with SARAID’s Team Leader and Rescue Operations Manager and a ‘role player’ being from the Republic of Angloland’s Ministry of Interior, the team then moved off by road to their given area of operations, which was at the Fire Service College at Moreton-in- the-Marsh.

On arrival at the FSC the team reported to the USAR Coordination Cell (UCC) again which had already been set up by our colleagues from @Fire Germany. The team were given an area when they could begin to set up their Base of Operations (BoO), which is a tented base camp consisting of multiple tents for personal sleeping, communications, management, medical, toilets/showers, decontamination basically everything needed to be a home away from home.

Over the next two days the team would work continuously on the famous RIG5 at the FSC, which for the purpose of the exercise became the 5-star Intercontinental Hotel which had collapsed

during the earthquake and had an unknown number of people still trapped inside. The team would demonstrate to the classifiers the skills that had be taught and exercised over many years during operational deployments using different scenarios that would involve the use of a variety of technical search equipment including the Delsar, a seismic sensing device for detecting people trapped under rubble, FL360 search camera, SearchCam 2000 and SearchCam Recon, using Makita power tools such as disc cutters and demolition drills in breaching and breaking 8” thick reinforced concrete slabs, this would involve horizontal, vertical upwards and downwards to gain access to trapped casualties. Patient handling and patient care in confined spaces and trapped under heavy beams as well as stretcher handling across an unstable rubble pile, ropework and SWAH which would involve lowering a casualty 10 meters out of a window of a tower block on a stretcher with an attendant medic, being able to shore windows and doorways using timber to prevent further collapse of a structure or cribbing beams to prevent movement, lifting heavy 5 ton concrete slabs using a crane. In total 7 casualties were successfully located and extracted after medic intervention.

In addition to the manual skills there was also the administrative jobs that had to be completed using the INSARAG Coordination and Management System (ICMS) which uses a suite of mobile phone and computer apps such as ArchGIS Survey 123, Explorer and Dashboard where different groups and functions work together in different areas of the system to produce and information management system that enhances situational awareness and as a result improved coordination and outcomes for the affected communities. This basically replaces paper-based forms, it allows the user to collect data on a variety of categories and then link that collected information back to an online dashboard where decision makers in the UCC can use that information to make more informed decisions and plan taskings. 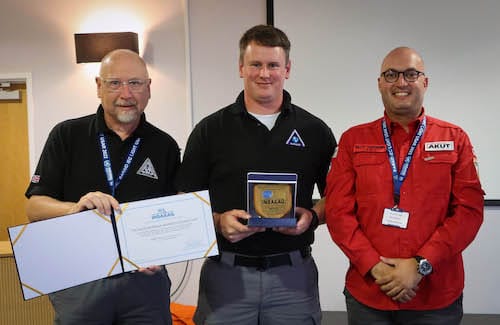 Late Thursday afternoon saw the exercise enter the demobilisation phase with the team preparing to pack up the base of operations and start to plan to return home.

SARAID felt very honoured and privileged to have both Mr Sebastian Rhodes Stampa, Chief of Emergency Response Section, UN OCHA and Mr Winston Chang, INSARAG Unit Head attend the exercise as official observers, and on Thursday evening after the end of the exercise, the SARAID team members attended a presentation ceremony to find out the outcome of their endeavours. Mr Brad Commens AFSM, Chief Superintendent and Director of Specialist and Technical Response for Queensland Fire and Emergency Service who was the international classifiers team leader highly commended the team on their efforts and then handed over to Sebastian Rhodes Stampa who confirmed that SARAID had successfully passed the IEC with

flying colours to become the first and only UK voluntary team to be an INSARAG Classified Light USAR Team and only the third worldwide and presented Gary Francis SARAID’s Executive Director and IEC Exercise Director and Will Selley SARAID’s Director of Operations and IEC Exercise Controller with the official INSARAG certificate and plaque and all team members with their INSARAG patches. After the official celebrations the team enjoyed a few well-earned beers.

We must not forget that working tirelessly behind the scene was a dedicated group of SARAID volunteer team members that made up the Exercise Control (ExCon), a support team of role- players, casualties and drivers without whom the exercise would not have been possible, the 10 members of @Fire Germany who had travelled over from Germany to provide support to the team and Mr Belit Tasdemir from AKUT Search and Rescue Association Turkey who was SARAID’s official Mentor and guided and advised the team throughout the entire planning, preparation and operational phases of the exercise.

To find out more about SARAID and the work we do check out our website www.saraid.org.

We provide our services to any country in need of assistance absolutely free of charge, and sadly as an organisation we face a continual struggle to raise funds. People rarely consider a charity such as ours until a disaster hits the headlines, we receive no Government funding or funding from the DEC (Disasters Executive Committee), we rely on public donations and sponsorship or support from commercial companies for equipment.

You can make a donation via PayPal or Justgiving, just click on the button below, we rely on public donations to continue our work.  We don’t spend on advertising and we receive no DEC (Disasters Emergency Committee) Funding.

With thanks to our supporters 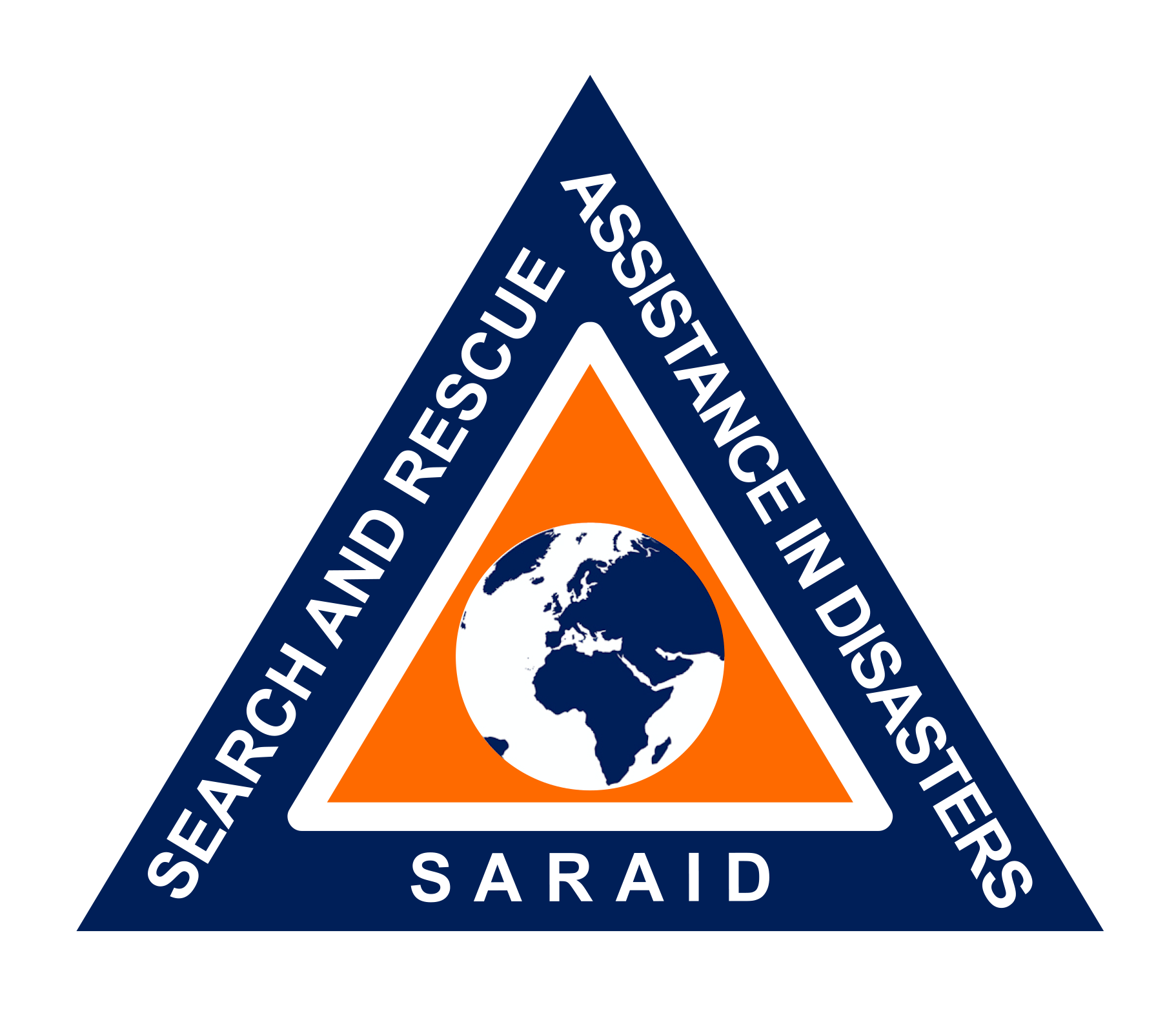